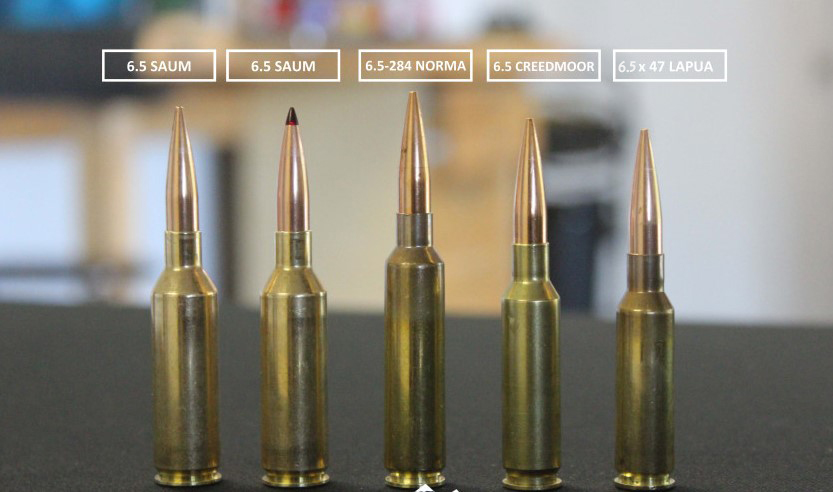 Why is the 6.5 mm Remington Short Action Ultra Magnum becoming such popular cartridge in the world of long-range hunting and competitive shooting? I am hoping to help educate everyone and get some of these questions cleared up.

Remington knew that with a wider powder column it was easier to get better velocities and an efficient powder burn with the entire powder charge in their popular 300 RUM and 7mm RUM.  Remington also knew why to use a cartridge that did not have a belted magnum which is sought after by shooters and reloaders. In belted magnums, the brass stretches and has problems with keeping it resized next to the belt as brass ages.  The brass life tends to be longer in calibers without a belted cartridge.

Remington Arms made the 300 SAUM and 7 mm SAUM line of cartridges for multiple reasons. The shorter wider powder charge helps in setting off the charge more rapidly. This boosts efficiency and accuracy with a smaller and more efficient powder charge. With this being said you can run slightly shorter barrels and still have great velocities. This also helps to keep the barrel more rigid. In short, the SAUM cartridges are great cartridges for a more compact hard-hitting hunting rifle.

6.5 mm SAUM has come about in the last couple of years because of the need of a cartridge that recoils less, hits hard, and gets the bullet to maximize its ballistic coefficients at all ranges. This also helps carry more bullet energy out at long ranges.

The advantages of 6.5 bullet in SAUM cartridge

Let me explain what advantages this cartridge has with a 6.5 mm bullet over the other size bullets in a SAUM cartridge.

A 140 grain 6.5mm bullet from the SAUM has speeds around 3200 fps with a 26” barrel and custom loads. This is compared to a 7mm SAUM which does about 2800 – 2900 fps with a 180 grain bullet. If you compare the ballistics on these two calibers it will show you the faster 140 grain 6.5mm will outperform the slower heavier 7mm bullet. It is all because of high ballistic coefficients and velocities on the 6.5mm bullet from the SAUM cartridge. Even though the heavier 7mm bullet is rated at a high BC it doesn’t have the initial velocities to maintain the energy and speed downrange.  The SAUM cartridge works great at pushing these 6.5mm 140 grain high BC bullets at great speeds with lots of energy. This is why necking the 7mm SAUM cartridge down to make 6.5 mm makes so much sense.

This caliber in the hunting situation or competitive shooting will benefit you greatly because it maximizes the speed and coefficient of the bullet and this helps to stabilize the bullet for extended long-range shots. This also maximizes the amount of energy that it has when it impacts on the animals when you take a longer range shot. From close range to long range the 6.5mm SAUM is a complete performer and is not comparable to a lot of the other 6.5mm cartridges on the market today.

To compare the 6.5mm SAUM to some of the other common magnum cartridges we need to go much larger such as 300 win mag and the 7mm rem mag. Let’s compare energy and velocities of these magnum calibers verse the 6.5mm SAUM.

Let’s do the comparison based on the following information: 500 yard shot,  5,000 feet of elevation and 50 degree temperature.

Now let’s compare its ballistics to another caliber such as 7mm Remington Magnum because it is such a popular caliber. With the 7mm Rem Mag shooting a 168 grain VLD (very low drag bullet) with a ballistic coefficient that compares to a coefficient of the 6.5 mm at the same ranges, the 7mm Remington magnum shooting a 168 grain bullet at 3,000 fps out of the muzzle at 500 yards the energy is 2100 foot-pounds and the velocity of  2,380 fps.

So in comparing the 6.5mm SAUM to these other common magnum cartridges, it shows what kind of performer this caliber truly is, with just as much energy and higher velocities at 500 yards. We also just proved that the 300 win mag does not even compare with a 180 grain bullet. I don’t want to stop here, so let’s compare it further against the 7 mm rem mag with a high ballistic coefficient bullet.

An abundance of great bullets for the 6.5 mm caliber

There are many companies that manufacture high BC 6.5 mm caliber bullets today. The 6.5 mm SAUM benefits from 140 grain and 130 grain bullets because of the higher BC that comes along with these bullets. Your choice of the bullet should depend on what game you want to hunt or what kind of rifle competition you shoot. If you are only after a hunting rifle, you should stick with 140 grain bullet. There are several manufacturers that build amazing bullets with the high ballistic coefficient for these cartridges. You can utilize the 130 grain bullet if you would like the recoil to be less and if you will be hunting smaller game like deer and smaller. If you are going to hunt larger game such as elk, the 140 grain bullet is important to keep the energy high and still provide a good knockdown power.

As for competitive shooting, your choice of a bullet depends on what kind of shooting you are performing. If you are doing a lot of positional shooting you may want to choose a lighter bullet for less recoil, so you can see more impact and stay on target. If you are only shooting from a prone position and you can limit the recoil and be able to see the impacts with a larger muzzle device to reduce recoil you may want to choose 140 gr and 142 gr bullets that are available today for match-grade competition shooting. Either one works sufficiently. There is slightly more recoil with the 6.5 SAUM compare to other widely used calibers in the competition world, but it works well.

When reloading for this caliber there is a wide range of powders, bullets and other reloading components available today.  As I mentioned earlier the choice of bullet should depend on how you will be using your rifle. Next, you need to decide on what brass, primer, and powder you want to use. Once you figure out what brass you will use, the choice between 250 CCI, 210 M, or 215 M Federal primer will handle any of these cartridges needs for ignition. As for powder in my experience, it seems that Hodgeon H1000 works the best. Hodgeon H4831SC and few of Reloader powders (Reloader 23 and Reloader 26)  work in the cartridge as well. Powder charge for H1000 will range between 58 and 61 grains with good burn rates and efficient burns. Great speeds are easily obtained from a 24” to 26″ barrels in 3,100-3,200 fps.

The rifle of choice for family and youth hunts

Hunting and exploring in the great outdoors with your family is a great experience. As the owner of BMP, I am being asked a lot of what caliber would be suitable to take on a hunt with a family. Would the 6.5 mm SAUM work well for the family?  My answer is yes. In my eyes, this cartridge is the best family hunting cartridge and here are the reasons why:

If you are ready to build a custom rifle in this awesome caliber – let me do it for you!